A substantial body of literature suggests that depression is associated with folate deficiency,1-31 and that patients with folate deficiency either experience a later onset of action,2,19 lesser improvement,4,8,9,13 a more severe depressive episode,8,19-21 or higher chances of relapse14 when taking antidepressants. The link between folate and depression is supported by observations that a common genetic variant of an enzyme that reduces one’s ability to convert folate to its centrally active metabolite, MTHF, specifically, the C677T variant of the enzyme methylene tetrahydrofolate reductase, is more common in patients with depression.15,26-28 In this article and in the figures, the centrally active metabolite of folate will be referred to either as L-methylfolate or as MTHF.

The formation of MTHF from foods containing dihydrofolate or enriched with synthetic folic acid is shown in Figure 1. The enzyme methylene tetrahydrofolate reductase forms this centrally active metabolite, MTHF, in the final step of this process (Figure 1). The link between folate and depression is also supported by numerous studies suggesting that folic acid,16,17 folinic acid,31 or MTHF18,32-35 either have antidepressant action or enhance the therapeutic benefits of antidepressants or lithium. 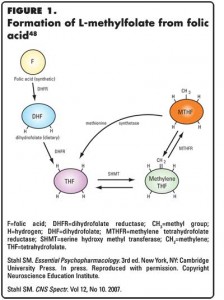 How Does L-methylfolate Act as an Antidepressant?

Antidepressants boost the actions of one or more of the three monoamines: DA, NE, and/or 5-HT. MTHF acts as an important regulator of a critical co-factor for trimonoamine neurotransmitter synthesis. This co-factor is known as tetrahydrobiopterin (BH4) (Figure 2A).36-48 By boosting trimonoamine neurotransmitter synthesis via enhancement of BH4, MTHF presumably is able to augment the antidepressant actions of known antidepressants. 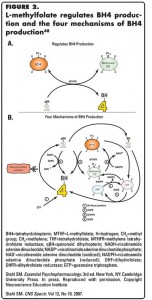 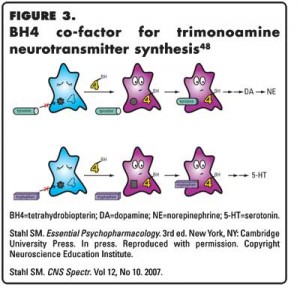 Studies16-35 have now shown that administration of folate, MTHF, or another folate derivative known as folinic acid (Leucovorin), can augment the therapeutic efficacy of antidepressants in patients with major depressive disorder who fail to respond adequately to their antidepressant, and who may or may not have measurable folate deficiency. Current research thus suggests that MTHF may be indicated for depressed patients with low plasma, red blood cell, and/or cerebrospinal fluid folate levels, and who have not responded adequately to antidepressants (Figure 4B).16-35 Theoretically, many patients with inadequate responses to a monoamine-enhancing antidepressant, even if there is no folate deficiency, could benefit from MTHF treatment that elevates their BH4 levels (Figure 1), if it led to enhancement of their trimonoamine neurotransmitter synthesis (Figure 3; also compare Figures 4A and 4B).36-48

Why L-methylfolate Rather Than Folic Acid for Depression?

Folate is one of the 13 essential vitamins. Dihydrofolate, a mixture of polyglutamates (ie, a number of glutamatic acid entities) is the form of folate obtained from dietary intake of green vegetables, yeast, liver, kidney, and egg yolk. Folic acid is the synthetic form of folate contained in over-the-counter vitamin supplements (usually mixed with several other vitamins and nutrients and present in low doses). Folic acid is also the synthetic form of folate contained in prescriptions written by a licensed practitioner in higher doses for medical use.

Dihydrofolate and folic acid are converted to monoglutamate entites by the enzyme alpha-L-glutamyl transferase in the intestinal wall as they are absorbed.47 Once absorbed, monoglutamate entities are converted to MTHF, the form of folate that passes into the brain and is utilized by trimonoamine neurons to facilitate neurotransmitter synthesis (Figures 1 and 4B). Normally, ingesting folate from dihydrofolate in the diet or from folic acid in synthetic supplements will result in adequate delivery of MTHF levels to the brain, especially in those individuals with the more efficient genotype (C677C) producing up to 100% of the enzyme methylene tetrahydrofolate reductase and who do not have depression.

However, robust levels of MTHF in the brain, which may be necessary to maximize the chances of boosting trimonoamine neurotransmitter synthesis (Figures 2–4), are more likely attained after administration of MTHF rather than folic acid (Figure 4B). Thus, administration of MTHF may have significant advantages over administration of folic acid as a TMM to augment antidepressants in depressed patients who do not respond adequately to their antidepressant treatment. Such patients may or may not be folate deficient, may or may not have the inefficient form of the genotype (C677T, T677T) producing 35% to 71% of the MTHF enzyme, and may or may not be taking various anticonvulsant mood stabilizers that interfere with folic acid absorption or MTHF formation, such as lamotrigine, carbamazepine, and others (Figure 4B). Further research is needed to identify those depressed patients most likely to respond to MTHF augmentation, including studies of both unipolar and bipolar depression.

In terms of what is known about treatment with folic acid versus MTHF, it may take as much as 7 mg of oral folic acid to generate the same plasma levels of MTHF as giving 1 mg of oral MTHF.49 How much folic acid is this? The recommended daily allowance of folic acid from food or dietary supplements is 0.4 mg (0.8 mg for pregnant women); over-the-counter multivitamin supplements typically provide between 0.25 and 1 mg of folic acid; normal “prescription strength” folic acid is 1 mg pure folic acid; high-dose prescription folic acid for treating pregnant women to reduce the risk of neural tube defects is between 4 mg and 5 mg. By comparison, the lowest dose of MTHF studied in depression to augment antidepressant treatment is 7.5 mg, roughly equivalent to 52 mg of folic acid.32 Although high doses of folic acid can be administered orally, the precursors of MTHF may compete with MTHF for entry into brain by binding to folate transport receptors, limiting the amount of MTHF that can enter the brain (Figure 4B).50-52 Thus, high doses of MTHF are likely to provide substantially more active MTHF moiety to the brain than high doses of folic acid. The exact dose of MTHF to treat depression is not fully determined, but since MTHF works indirectly to boost monoamine synthesis, high doses are likely to be necessary to optimize this action.

What is a Medical Food?

MTHF is marketed in the United States as a “medical food” also called Deplin, which contains 7.5 mg L-methylfolate and is available by prescription only. According to the Food and Drug Administration, a medical food is different both from a drug and from a food, and is defined as a food that is formulated to be consumed orally

“…under the supervision of a physician and which is intended for the specific dietary management of a disease or condition for which distinctive nutritional requirements, based on recognized scientific principles, are established by medical evaluation.”57

Medical foods are required when dietary management cannot achieve the specific nutrient requirements. Treatment with MTHF seems to be safe, apparently has few if any side effects, and is generally less expensive than augmenting with a second antidepressant. Further research is necessary to determine the exact priority this approach should be given in treatment algorithms for major depression.

MTHF may have additional actions on monoamine neurotransmitter metabolism through another mechanism, namely, its well-known ability to regulate methylation reactions (Figure 5).37 Another agent possibly useful for augmenting antidepressants in patients with inadequate responses is SAMe, which shares with MTHF the ability to regulate methylation (Figure 5).58,59 Both MTHF and SAMe may therefore impact the regulation of various critical 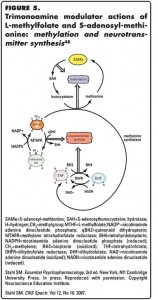 components of monoamine neurotransmitter activity not only by indirect modulation of neurotransmitter synthesis by promoting the synthesis of BH4 enzymatic cofactor, but also by modulating catabolic enzymes, monoamine transporters, and neurotransmitter receptors via methylation and its downstream effects (Figure 5).60-65 These complex mechanisms are under active investigation to determine how the natural products and putative TMMs, MTHF and SAMe, may contribute to the treatment of depression.

L-methylfolate, also known as MTHF (methyltetrahydrofolate), acts as a trimonoamine modulator to boost the synthesis of the three monoamines: DA, NE, and 5-HT. This action may provide antidepressant efficacy when L-methylfolate is given as an augmenting agent to depressed patients unresponsive to traditional antidepressants. L-methylfolate may be especially useful in depressed patients who have the genotype coding for an enzyme that causes inefficient synthesis of L-methylfolate, and for those individuals who are folate deficient, including patients whose folate deficiency is secondary to the administration of various anticonvulsant mood stabilizers.

Novel Therapeutics for Depression: L-methylfolate as a Trimonoamine Modulator and Antidepressant-Augmenting Agent
Inflammation, Glutamate, and Glia in Depression: A Literature Review
Beyond the Dopamine Hypothesis to the NMDA Glutamate Receptor Hypofunction Hypothesis of Schizophrenia
Bipolar Depression: Best Practices for the Outpatient